WAAAAYYYY back in the day, Kenner's Star Wars line of toys was an all encompassing imagination bonanza. The first line of figures and toys came through in 1978 and what kid didn't want a LIGHTSABER !!!
Kenner's offerings that year gave us this:
The Star Wars Inflatable Lightsaber !! 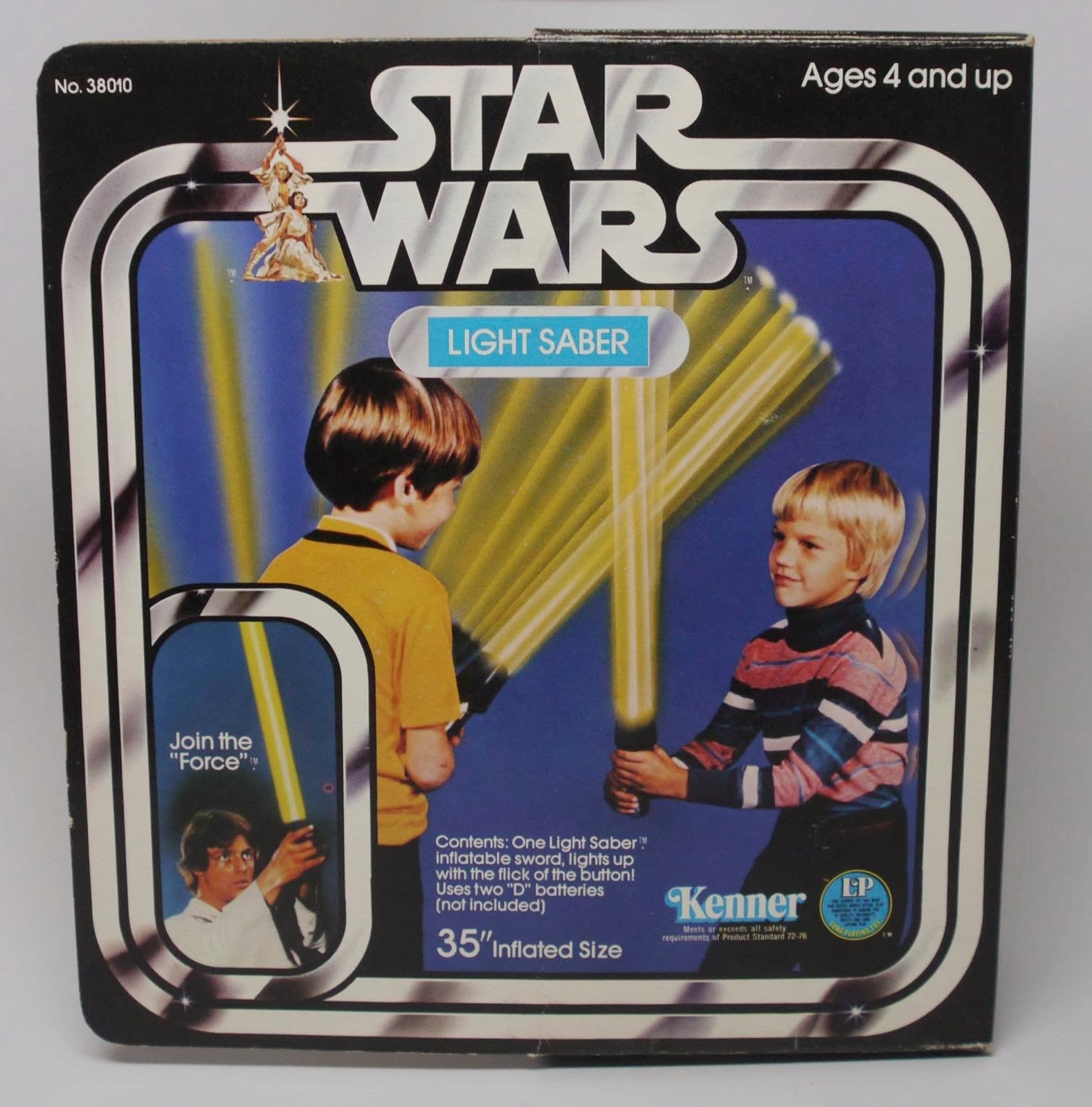 I remember getting this for my birthday along with a pile of other Star Wars items.

I remember ripping it open, slapping the old style "Heavy Duty" batteries (no alkaline for this baby) and then blowing up that yellow tube until I was dizzy ! I slid the retainer on and inserted the tube into the flashlight as per the instructions. What could go wrong ? I ran down to the basement and lit it in the dark. The glow was magnificent. I dreamed of beating my brothers senseless with it as soon as I got upstairs. They would run from me like a trove of startled Sand People.
I swung it at the first thing I saw and ......
the tube fell out.
I slapped that tube back in and thought "I need a softer target, like another person", and so I went off in search of my older brothers.
A quick search of our small house found them upstairs in one of their rooms and so I jumped right in. I said some witty phrase that to me sounded pretty clever to put the fear of the Lightsaber in them first. Then I swung.....
The tube hit its mark perfectly, but instead of a corpse resembling Darth Maul hitting the floor, the yellow tube laid there.
I reloaded to a chorus of laughter and took another swing with the same results. The exception this time was that now the tube lay there deflated looking like a limp sock.


Sulking out of the room like a lambasted Charlie Brown, I went on to some of my other presents.
My brothers must have taken pity on me because they patched the tube with the repair kit that came with it (good foresight on Kenner's part) and used half a roll of electrical tape to anchor the tube to the flashlight (pissing my Dad off to no end). I got to use it for a little while until later in the day, after swatting my dog, some teeth marks ended its very short run. I did have a fancy Star Wars flashlight for a while after that, until the batteries leaked and corroded the innards, ending its lifespan.

Lets take a look back at this "wonderful" toy.

Remember the commercial ? Watch this:


Hey where is the tape holding the tubes on !?!?! Maybe I should have stuck to hitting balloons like the commercial, but what fun is that ? Notice the limpness in some of the Sabers when the lights go out ? Speaks volumes for the quality .....

Here is what came in the package: flashlight, tube, instructions, repair kit, pamphlet and two batteries. I cant believe it came with batteries ! 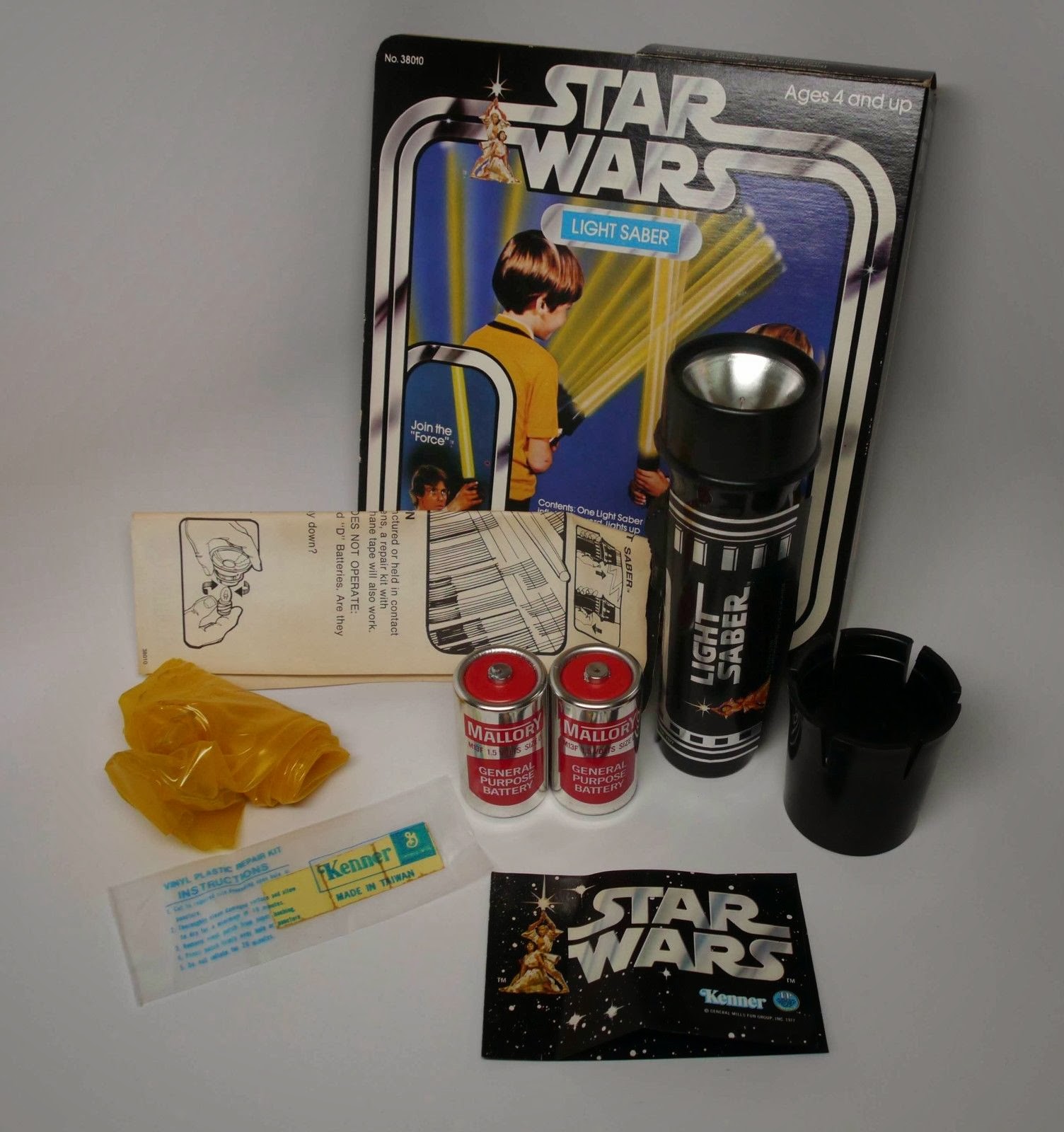 Typical for Kenner; the box art is great. Scenes from the movie depict the Lightsaber wielding characters. Can't help but to notice that Obi-Wan and Luke's Sabers are yellow. Not exactly movie accurate .... 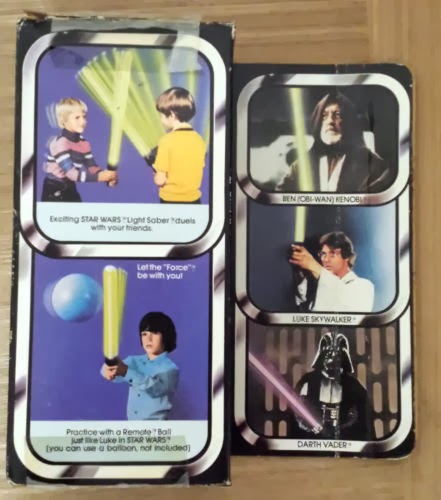 Here is an alternate version of the box: 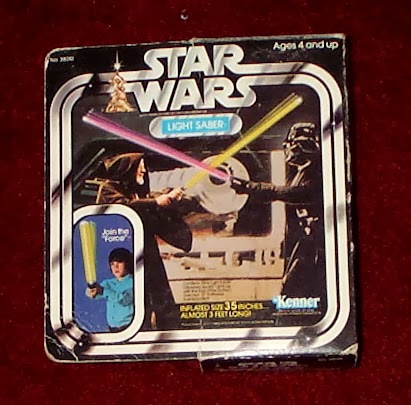 Notice how Obi-Wan's Saber is edited to be yellow ? What, was there a sale on yellow tubes, or no blue tubes were available ?


The hilt (flashlight) is actually pretty cool. I know; its a black flashlight with a sticker on it but it looks like a Lightsaber ! I did get to use this as a pretend saber for a bit without the tube, fashioning a hook to the end so I could attach it to my belt. Imagination filled in the rest of the blade. 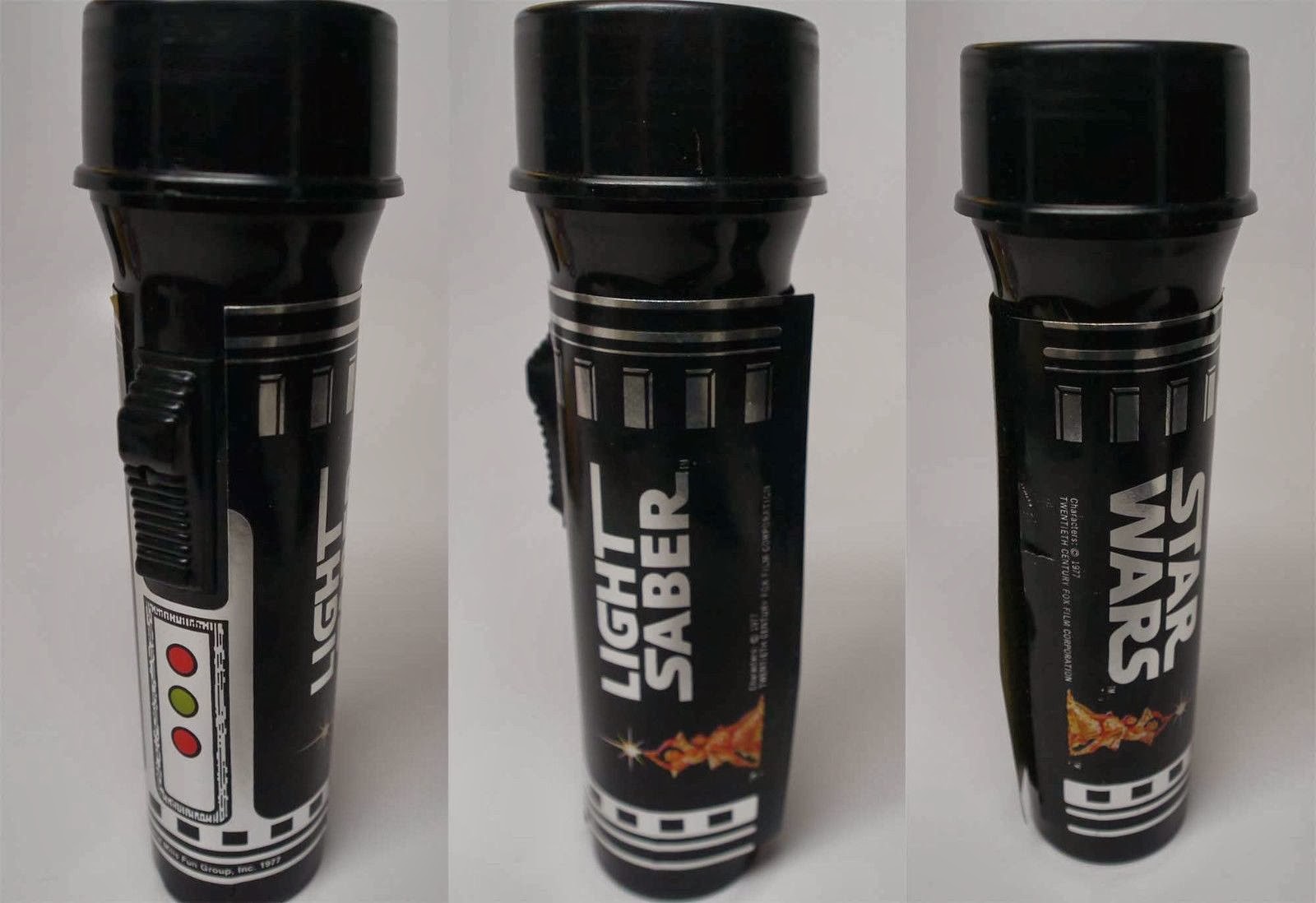 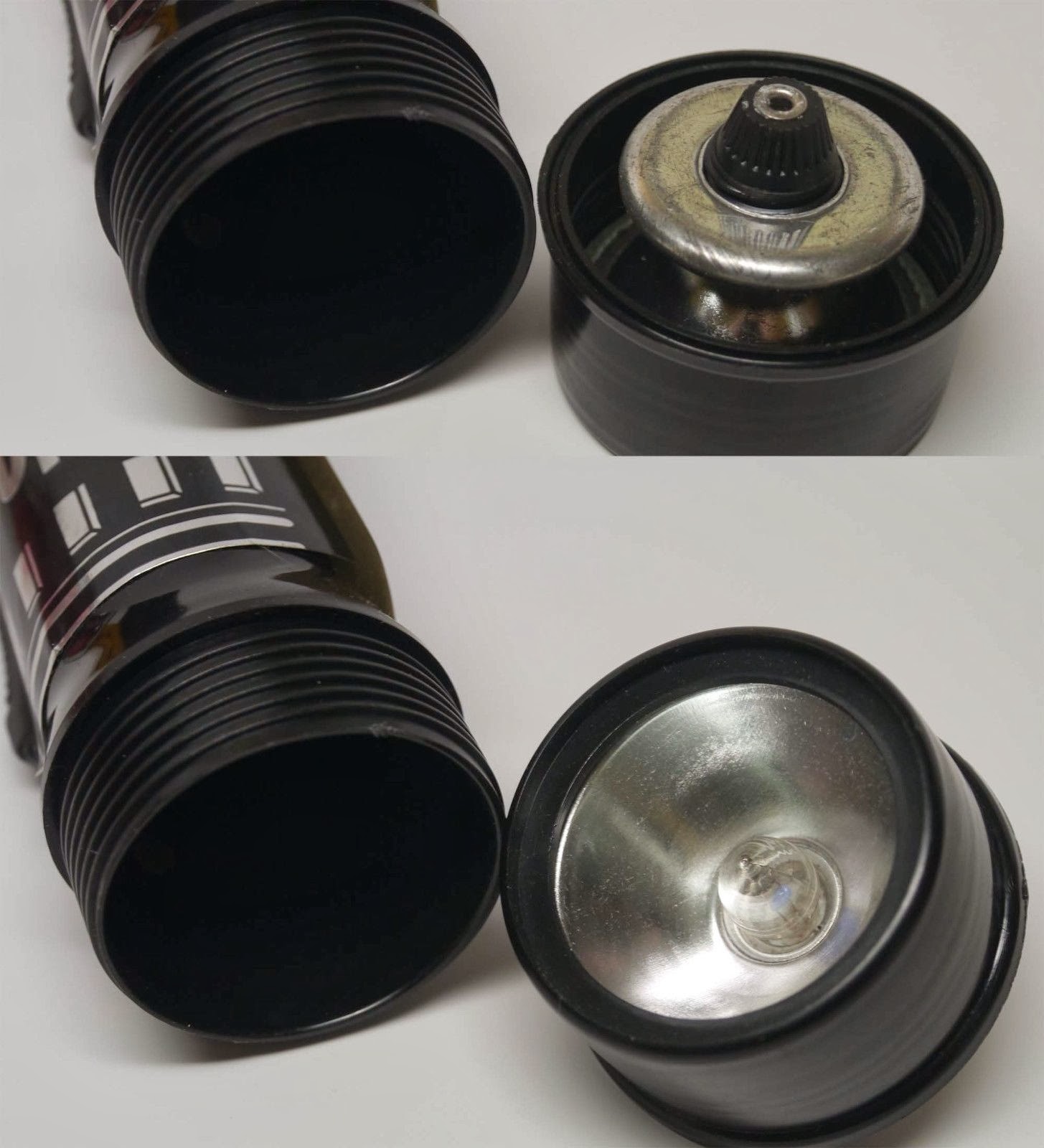 Instructions, pamphlet and a repair kit were also included. I know, its an inflatable toy and should come with a patch, but I remember the tube being pretty fragile. I don't remember, and seriously doubt that they offered it, but a pack of replacement tubes would have helped this product. 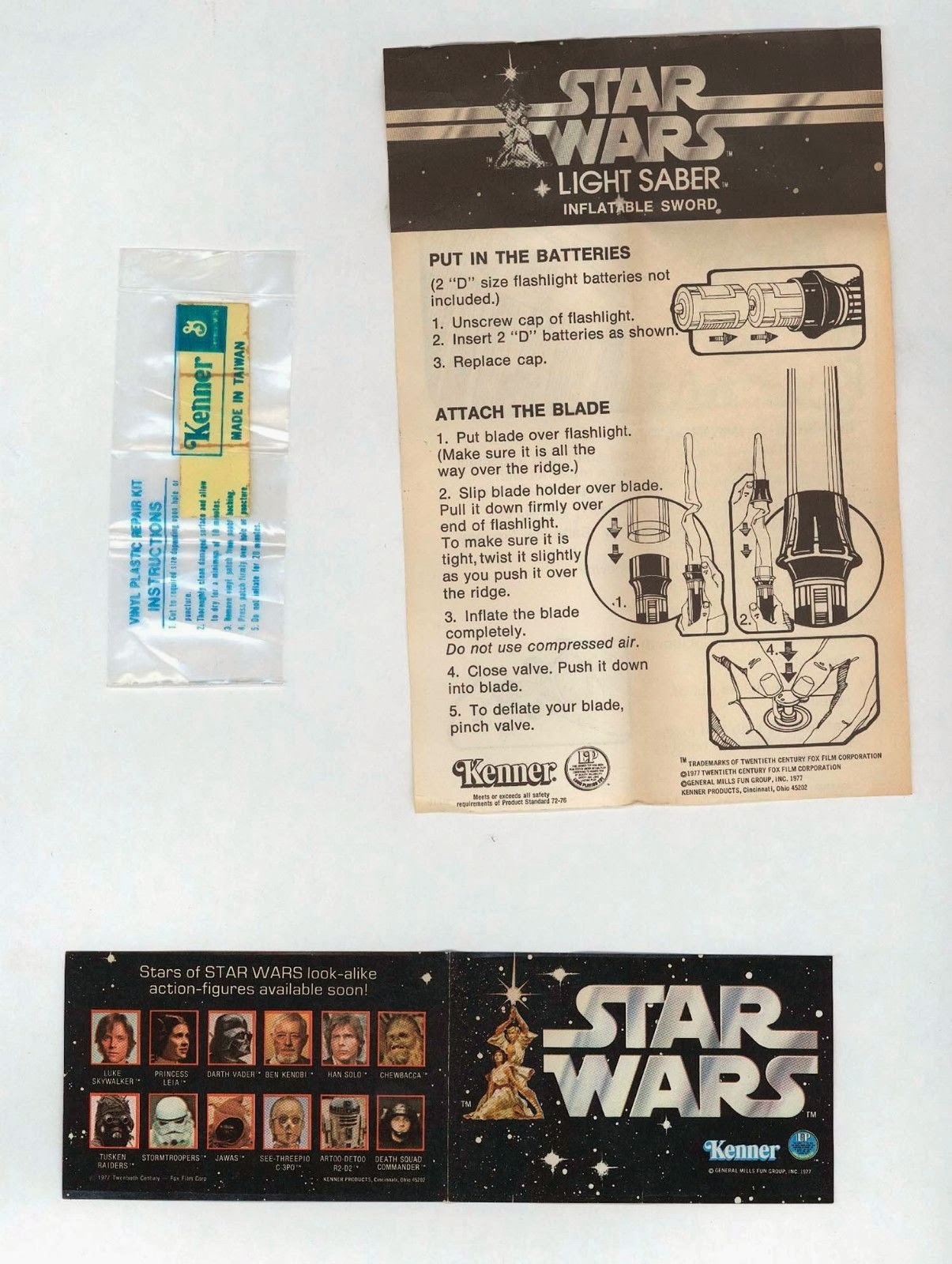 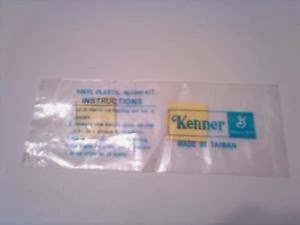 What can I say ? It was the 70s and a child toy. Quality was not a huge focus back then, nor was putting out a toy that was going to pass scrutiny some 40 years later. Kenner was marketing a fun toy that they could make money off of. Not too long after this the "Lazer Sword" knockoff and "The Force" Lightsabers would hit the market and deliver the fantasy that kids wanted.
Even though my experience was so-so with it; the Inflatable Lightsaber gave me a lasting memory. I probably edited out the part where I cried though ....   :)
__________________________________________________________________________________
This toy has not made its way into my collection as it is quite expensive. I used pictures and video taken from other sources to write this.
Thanks and credit go to:
www.youtube.com for the video.
www.ebay.com for the pictures (congrats on selling it for quite a bundle).
The Star Wars Collectors Archive for the alternate box photo.
﻿
Posted by Unknown at 2:56 PM