Cesspool is Cobra's answer to the Phantom of the Opera


Once the Chief Executive of a multi national corporation, Cesspool had an accident involving toxic waste that disfigured him and pissed him right the hell off !! He joined Cobra with the agenda of making the world as ugly as he became. Or something to that affect .....
Cesspool, the figure, was named Vincent D'Alleva after a Hasbro executive at Hasbro that ran the GI Joe line  at the time. Pretty cool, having a Joe named after you, but a bonus would be better .....
Cesspool had a short run in the GI Joe Marvel comics in issues 123 through 131. He had a small story along the Headman drug story at Broca Beach, and a bit part later, but in all uneventful in Marvel. In issue 1 of the Devils Due Americas Elite version Cesspool had a cool part. He was being investigated by Scarlett and was found to be dying of cancer from the toxic sludge that he messed around with. It was cool to see the effects of his "lifestyle" that caught up with him, even if it was a brief look. One has to assume that he died after that but it was never sewn up.
His figure is pretty cool, lets check him out: 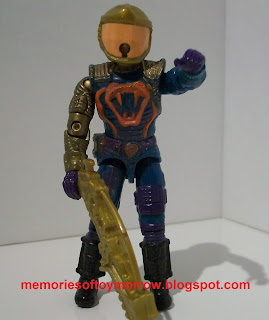 The thing about this figure is, if you put his goofy M.O. aside, he is really awesome looking ! I love the Cobra on his chest and the detail on this figure is great.
His mask is cool and hides ....... 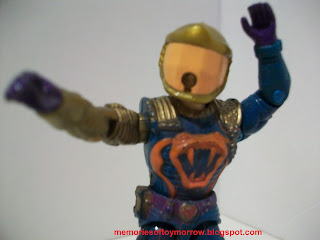 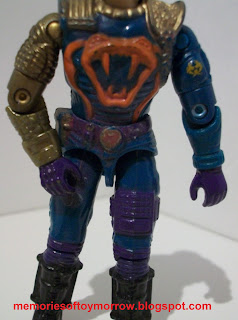 That Face ! It's like the Cobra version of the Phantom of the Opera !! 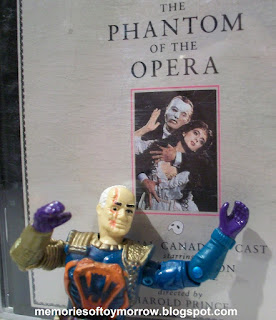 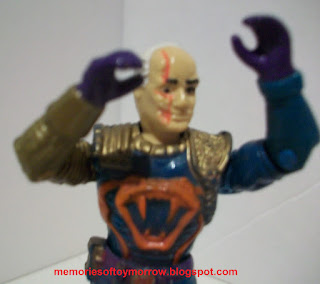 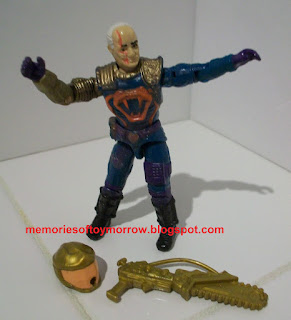 Cesspool is a cool addition to my Joe collection. I didn't have him as a kid (I was a senior in '91) but am glad I have him now. He really looks cool and is detailed well. His chainsaw is kinda lame, but I guess the water rifle simulating the "toxic sludge" kinda works with him. All the bad aside the figure itself is what really draws me to him. I would have customized him to greatness or made up a better back story for him if he was part of my play as a kid. The white hair ..... Cobra Commander's dad or something .... I'm sure it would have been better than the file card !!
Posted by Unknown at 9:36 PM