Koko B. Ware. I'll let that sink in ..... Yes, Koko B. Ware. The Birdman himself and his pet Macaw named Frankie. LJN released Mr. Ware with the the fourth series of Wrestling Superstars in 1987. All things considered, the man who would eventually become the "Jobber to the Stars" is immortalized pretty nicely as an 8" rubber action figure.
Overall, the figure is great ! Great paint, lots of detail on his jacket, and posed so that you could pull off a lot of different wrestling moves. 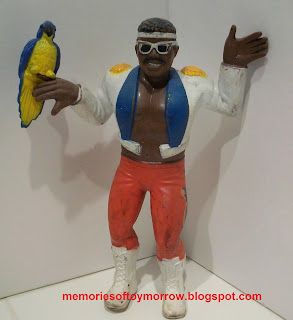 Check out Frankie ! An accessory that got a lot of attention and paint !! 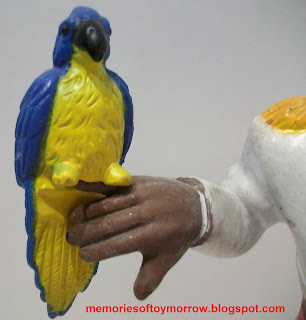 Frankie can perch on Koko's finger ! Lots of style ! He looks great ! 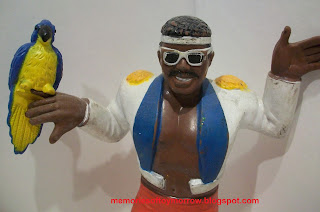 Even the sides of his tights got a paint app ! How's that for detail ! 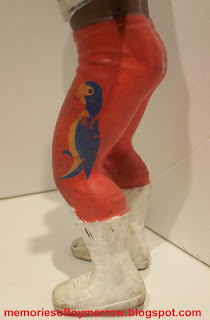 Koko B. Ware got a big push when he first debuted in the WWF. Instantly I liked his high flying moves and style. His gimmick is kinda lame but back then in the WWF, all of them were. I couldn't wait to get this figure when he came out and I used him constantly. Yes, Koko wound up jobbing a lot, but in my Tag Team ranks he usually found a place. I teamed him up and pushed his team to Tag Team Title status many a time. C'mon, with a flashy jacket and moves like his he is bound to get a lot of attention. I left Frankie in the accessory box where he belonged ........
Got something to add ? All are welcome to leave a comment !
Posted by Unknown at 11:28 PM