Locutus: Star Trek makes Picard a Figure for the Next Generation

The Star Trek: the Next Generation figures, produced by Playmates, were simply wonderful. The figures and cart art are beautiful. They came with a bunch of accessories. They were based on one of the greatest television shows ever made. Whats not to like ?
This is Locutus, of Borg. You can resist liking this figure, but it will be futile :)
Based on the Locutus of Borg character that Jean Luc Picard was turned into, this figure is awesome. First off, I always liked the look of the card. The Enterprise D with the TNG logo imposed over it looks great. The colors keep with the shows on screen pallet, and the figure, being 4.5 inch scale, really pops in the bubble. Locutus just looks grand on the card. The figure is impressive. The back of the card displays good head shots of the rest of the line along with a bio card and description of the included accessories. 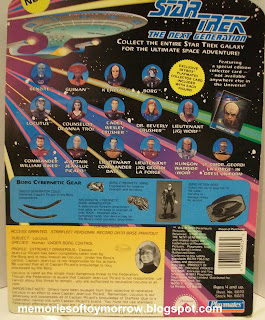 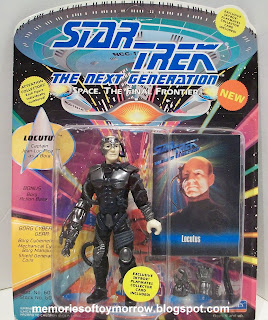 Th figure itself is great. The detail is spot on. Hoses, detachable limbs and a near perfect likeness of Patrick Stewart. Playmates really got this figure right. 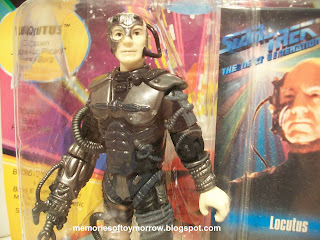 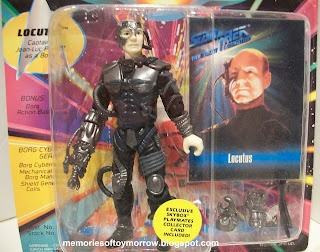 This line is where I started collecting action figures again as an adult. In particular, Locutus was where it began. When I really started getting into TNG hardcore and learned that there were action figures, there was a Locutus, and it was OK for a twenty something to collect em, I was off to the races ! Picard was my favorite of the show and I collected every plastic figure of him, so you'll be seeing them later. Locutus and the rest of the STTNG line form Playmates was where I began the TRU hunts trying to track down these beauties and it has blossomed to my wonderful collection of memories !
Posted by Unknown at 10:04 PM