Bravo Company Die Cast figure from Small World, he Names no Names and has no Story to Tell ....

Bravo Company Die Cast Metal figures !! Distributed by Small World Importing Co., Inc. in 1989, these figures made a huge impression in the Action Figure landscape of the time.
Not really.
This guy was sent over to me a while ago by John of Revenge from the Cosmic Ark fame some time back (Jboy rules !!!). I have done a bit of research into this line since I have no familiarity with it.
My findings ? Very little. They have also been named "Bravo Mission" (phryz.com) but I have not been able to get many factoids to add to this line's legacy.
The package is generic, gives very little information to lend to the line's use. The characters are not named or described in any way so you would have to use a bit of imagination to make them useful. The front art is nice. There is a bit of detail to the graphic and it displays well. The backer shows each figure offered in a group picture. No names or descriptions here either but my guess is the guy with the ski mask and bazooka is a "bad guy". 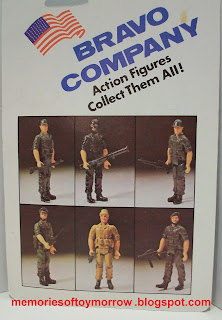 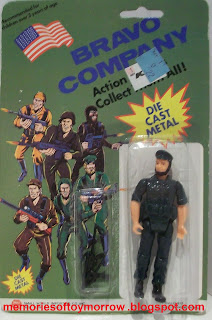 The figure itself is cool. Very SGT Rock-ish which I like. The hand placement reminds me right away of SGT Rock. Same articulation and similar molding makes me think that this was produced to be a knockoff of the SGT Rock line. They would have fit in well with the Rocks, die cast and all. 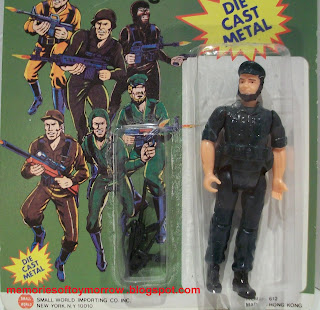 This guy reminds me of a figure that would be hanging on a peg getting overlooked, eventually getting clearanced at a low price. Its not a bad figure, but a bit too generic. Nothing to really hook someone into buying it. Mine is displaying proudly with all the other figures in my collection. Maybe one day I'll just make up a backstory for him as SGT Rock's pupil turned adversary .....
Got something to add ? All are welcome to leave a comment !
Posted by Unknown at 11:58 PM