This weeks topic for the league of Extraordinary Bloggers:

Pawn Stars, American Pickers, Hollywood Treasure, Storage Wars, Toy Hunters, Auction Hunters, Auction Kings — the list of reality TV treasure hunting shows goes on and on. If you could spend a week with the crew from one of these shows (or one that I missed) who would it be?

Now....I'll modify this a bit cause I have a different "Reality" show I watch ..... I'll pick a person that is a host of my favorite "Reality" Game Show, but would be the one guy I'd love to hang out with, listen to some stories and pick the brain of! 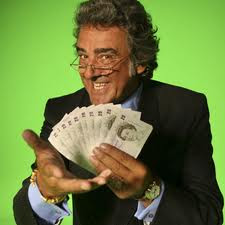 The premise of the show is simple: Each team is given  £200, 1 hour at a antique show and expert to help if needed. They have to find cheap but valuable items to sell at auction and whoever makes the most money wins!

For me though.....Mr. Dickinson would be awesome to hang with. Not only is he a major player in the antiques world, He is also an extremely interesting character. "The Duke", as he is known, has led a very interesting life according to his biography, and is a well established entrepreneur. I've always said that if you want to learn from someone, seek out the best! Usually these people are very interesting characters and are alot fun to be around!

He's original, a class act, flamboyant and a successful man of the world!

Married to a Cabaret Star, likes fast cars, an encyclopedia of knowledge....I'd have a pint with that guy!

Head on over to coolandcollected for more from the League !!!

What else does the League think?!?

shezcrafti would change the world of picking!!
Store it up at geekittillithurts !!
Short and funny as hell at that-figures !!!
Go on a Roadshow at greenplasticsquirtgun !!

CLICK THIS LINK!!! lairofthedorkhorde YOU WONT BE DISAPPOINTED !!! :)
Posted by Michael at 10:27 PM