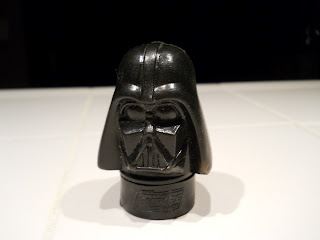 The TOPPS Darth Vader candy filled head!! In 1980 Topps made a ton of these, and I had an army of Vaders. There were little candy pellets that came out of a hole at the base.....kinda feels like hamster food or something now..... They made only a few versions; Vader, Chewie, C3PO, Stormtrooper, and Boba Fett. The second series included Yoda, Bossk, 2-1B and a Tauntuan.There was also a Return of the Jedi series that had an Admiral Ackbar,  Jabba, Sy Snootles and Wicket.  I've seen the Bossk and Jabba and they're freaky. Look em up on Ebay....messed up!! 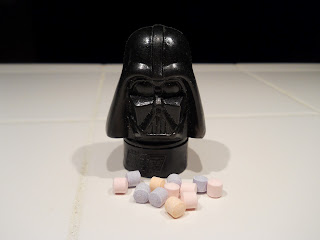 I searched high and low for one of these and found a sealed specimen filled with its candy intact :) Now... I understand that this is a 32 year old artifact and the candy was not meant to be eaten this far in the future but..... I DONT CARE !! I had a few and the candy is as I remember !! I am going to eat a couple a year until I die (or it kills me) so I remember the flavor!!

How often can you take a trip back in time to your childhood and try something that was lost long ago ?
Posted by Unknown at 3:49 PM