What happens when you have an imagination, lots of toys, but not one that can represent your new interest?? You learn to customize your figures !! 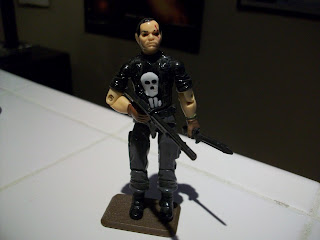 The day I went to the Super Flea and picked up my first Punisher comic I was hooked, but the question was..... " How do I act out the violence that the Punisher inflicts on GI JOE?" First you take Snake Eyes' chest, Flint's arms, Zap's head and I forget where the legs/torso came from and BOOM, a custom Punisher GI JOE !!! 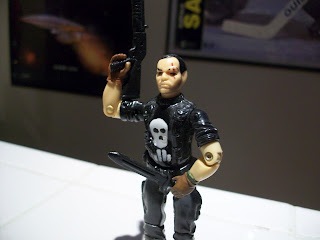 A paint marker makes the skull, red paint for the eye scar (just looked cool) and pencil for the five o'clock shadow. Bib Fortuna would give up his robe so that Punny here could have his trademark overcoat (time has claimed the overcoat and is now lost).

The idea of customizing GI JOES came from a friend. We were playing one day and I noticed he had a few different ones. After asking where these new and previously unknown gems came from he showed me the small screwdriver that could take out that screw recessed in the back. After that, the less popular figures and the ones who would become disabled from finger and crotch damage, you got to admit it sucked bad when the crotch blew out of your favorite JOE or Cobra - OUCH, could be reborn as another character that back then would have never seen the light of day in plastic !!

You, the reader will see that I was not stopped by Hasbro, LJN or any other toy company in my desire for realistic play. If they didn't produce it, I made it. Like many other children from my generation, plastic, paint, a dremel and imagination could create whatever was necessary for the next adventure !!
Posted by Unknown at 2:43 PM