Originally introduced in 1971, the Fisher Price Music Box Record Player has been entertaining children for years! Produced near my home base in East Aurora New York, with the Musical Movement made in Japan, this is a relic of most childhood dreams.
The process is simple. Put one of the five double sided records on the turntable, wind it up and just like a real record player, place the needle arm on the record to hear the it play a "Music Box" version of 10 classic songs.
Here is the track list:
Record 1: Jack and Jill / Humpty Dumpty
Record 2: Au Clair de la Lune / Twinkle, Twinkle Little Star
Record 3: London Bridge / Oh Where has my Little Dog Gone?
Record 4: Children's Marching song / Camptown Races
Record 5: Hickory Dickory Dock / Edelweiss 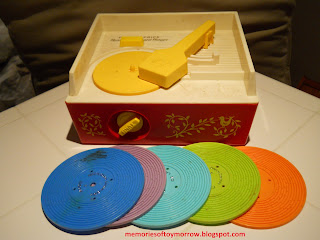 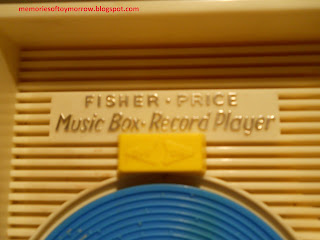 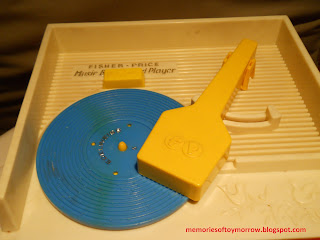 The "needle" arm that runs across the record is really cool for a toy. The head sits across the entire surface of the record, the bumps on the record click one of the needles in the row as it passes over it and makes the music. Pretty neat!! 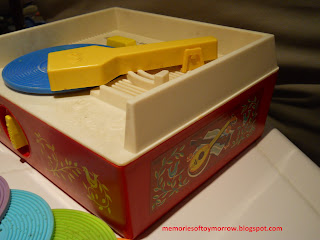 The records reside in an opening at the top for convenient storage. 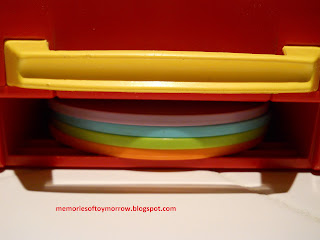 I have a lot of fond memories of this toy. What a classic. This one resided at my Grandmother's house and is probably the sole reason I love the song Edelweiss. I've had this for years and to this day it still plays a beautiful tune. The vintage look, the simple function, the classic tunes cry for a simpler time. The time when a simple tune played on a simple toy could entertain a child.
Listen and try to not be soothed.........