Iron Man's new nemesis in Iron Man 3 looks to be some version of the Iron Patriot!! Looks like Mr. Stark will have a new armored menace to face !!
﻿

I really dug the last two movies and these pictures are getting me stoked for the next !! Head over to movies.yahoo.com for their report. Yahoo's speculation is that he'll be "Eric Savin, one of the villains of "Iron Man 3." In the comics, Savin is a soldier who is gravely injured in a land mine explosion and reanimated as a cyborg called Coldblood-7. It looks like the movie merges his character from the books with the Iron Patriot armor (which was worn by Spider-Man's nemesis Norman Osborn, aka the Green Goblin)." 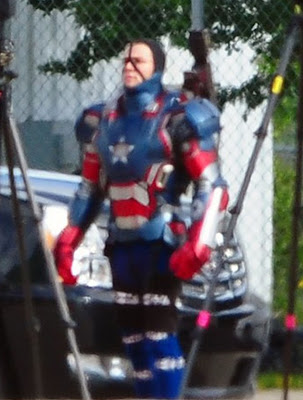