The League of Extraordinary Bloggers: State of the Blog

This weeks theme for the League of Extraordinary Bloggers:


Write a “State of the Site” for your web site. How’s it going? What exciting things have happened this past year? Where do you want your site to be in a year’s time? 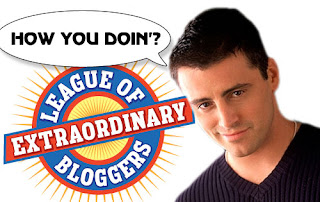 That a pretty cool pic!!
Anyway, he whole thing began in April of 2012....only 7 months ago!! I work as a Technical Writer and always wanted to be more creative, so after reading various Blogs I decided to give it a go.
But first I must give credit where it is due.
Reis O'Brien used to have an AWESOME blog called Geek Orthodox that I happened upon when trying to remember what the heck Presto Magix were. I remember  seeing the pictures and reading the post being so happy for having finally found what I was looking for but also, since I had no idea what blogging was, I found a site that really spoke to my interests. I found myself reading every back post and searching out other sites like that one.
He closed up shop at that domain and went over to be the Lord of Dorkness at The Lair of the Dorkhorde. I kept following and realized that I was wanting to jump in but how.....
Then I saw The League posts at Cool and Collected. This really got me thinking that I had a chance. I saw that many League members used Blogger and that it was free as well as newbie friendly for someone who wanted to jump in. I also saw that there were experienced Bloggers as well as Newbies participating in the League. It really gave me hope that I wouldn't be typing to myself and maybe some other people would actually read what I wrote.
So I did.
I decided that I would set up the site, write a few posts then start participating in the League. My first few posts, looking back, are pretty rough. But I got the hang of it and participating in the League really helped me to write to an "audience" by stretching the topics off of "here's my action figure, its cool."
Then I joined the Lair of the Dork Horde. I though they'd laugh at me but Reis let me in right along Bloggers with ALOT more experience than me.
So I have to give Credit to Reis and Brian for helping a Newbie along.
What exciting thing happened ?? I started writing and people responded. Slowly at first, but it came along. I have truly enjoyed the interaction more than anything. I look forward to being able to post something and you guys comment! I was commenting myself all over but have been a bit lax lately with life starting to get in the way, but I will make more time! It really is the best thing about doing this. I'm not making money at it, I really enjoy the interaction! There have been several Bloggers that have been more regular commenter's and its a good feeling to interact in that fashion. John over at Revenge from the Cosmic Ark lives miles away and Hobby (can I call you Hobby :) at Monster Cafe Saltillo lives in Mexico and we can talk toys through our respective Blogs.
I know I left out others but know that I do appreciate the comments and keep em coming! I respond to all of them and will continue !
I even had a giveaway contest and The Goodwill Geek won !! What kind of forum lets you do stuff like that!?!?!
Probably the best thing was to see how our community of Bloggers responded when Brother Midnight at Green Plastic Squirt Gun had a personal tragedy and everyone rallied behind him. Its something you just don't see very often and for people who only know each other through Blogging to give such a supportive response its very inspiring.  !!
After all that I have to say that I am most proud of the way every one rallied behind him.
Whats next........I have alot left on the walls and I have pulled the bins out of storage. I have alot more to share. Here's a bit of a look into "The Museum" and here all the magic happens.....
The end of my bar where all the pictures are taken....
﻿ 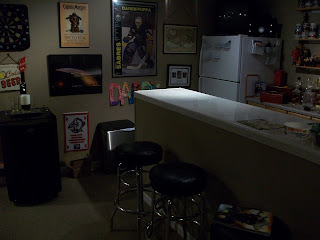 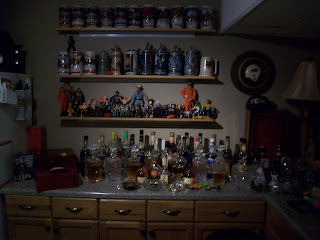 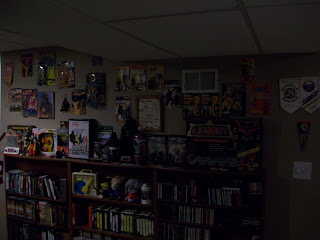 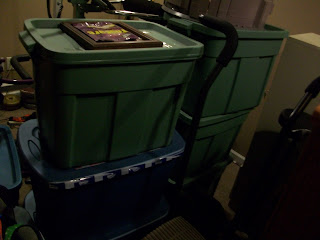 Check out the State of other League Members by clicking on their links: