Empire's Legends of the West was one of the all time great 3 3/4 Western Lines ever produced, and Davy Crockett is one of the best figures ! Empire Toys produced the Legends of the West line of figures in the late 70's. The 3 3/4 line was compatible with Legends of the Lone Ranger and the other Western toys out at the time. Empire toys produced these figures and a line of accessories to go along, but Excel and Imperial also produced them at various times. Anyone who had these figures knows that these figures and accessories are AWESOME!!
Davy Crockett adorned with his trademark coonskin hat, but he also carries a holstered pistol and 7 points of articulation ! The quality is OK for a figure produced 30 years ago but it is not up to today's standards. The body has a good bit of detail and the holster is very nice, but its the paint that lacks attention. The apps are a little off and can smudge easy. That being said the figure is robust enough to take on serious play and can be posed easily. The pistol, although very small, has a lot of detail and fits his hand very well. 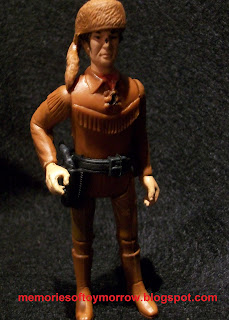 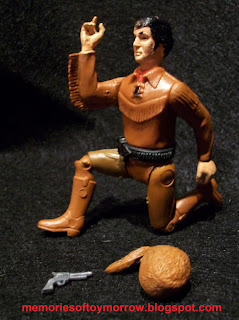 Jesse James does not like sharing the spotlight ! Looks like he stole himself a black vest and is looking to show it off, but Davy is not backing down !!! 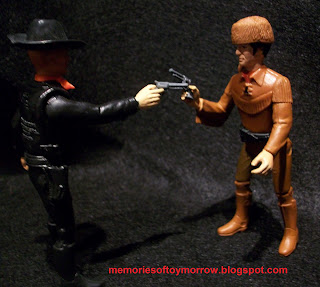 OH NO !! His twin brother and partner in crime is attacking from behind .... what a travesty !! 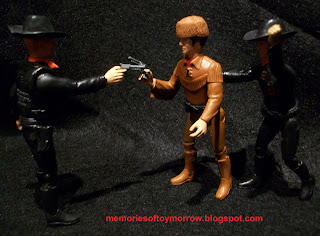 I love these figures. I dare say I had more fun with my pile of Legends and Lone Ranger figures than I did with all the Star Wars figures I had. Maybe its because the Star Wars figures already had built in roles and limited what I could do with them. The Legends of the West and Lone Ranger figures were very conducive to "out of the box" play. The lines diversity and numerous characters lent itself to long, involved adventures without many limits.

Check Out Jesse James from this line by CLICKING HERE !!

Check out the Gabriel Lone Ranger figure by CLICKING HERE !!!
Posted by Michael at 10:57 PM