Book Review Time: REDSHIRTS by John Scalzi, What every sci-fi knew but wasnt talked about!!

YES! John Scalzi's new book; Redshirts, Doherty books, gives you the story going on around the main characters. Did you think that it wasn't lost on the rest of the crew what happened to the non credited actors that beamed down on an away mission? Did you think that they didn't have lives of their own? 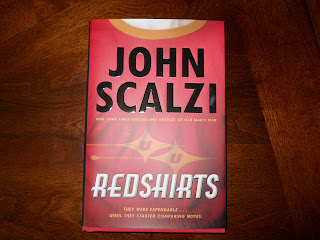 This book was on my radar for some time and I preordered it when Amazon first offered it up! This is quite a well written parody of the Original Star Trek series, more directly the "Redshirt theory" of the nameless redshirt security that beam down and are the ones who suffer for the glory of the stars. The story is set on the USS Intrepid, Flagship of the Universal Union. Sound familiar? The main characters all seem to be immune to the dangers of away missions, except for one unlucky bastard, Lieutenant Kerensky, who gets beat up constantly but always heals quick enough for the next mission. The "Redshirts" are not so lucky, as they are constantly in harms way. They have found a way to adapt to their circumstance but a new Xenobiologist, Ensign Andrew Dahl, finds out the awful reality of their situation and decides that he and his group of friends must find a way to fix it.

Now, the premise of this book was awfully interesting to me and the expectations going were really high. I gotta admit that, at first, I was a bit disappointed, thinking that the book was going slow and not really what I expected. Until page 103 (You'll know when you get there). That was the WOW moment of the book and it just flew from there!!

Twists, turns, unexpected coincidence and a whole lot of  intrigue was the story after that!

I really liked Mr. Scalzi's take on the life and role of the "extra" characters in the universe. If you were the kid who thought that when you weren't playing with his toys, or watching the show, they had lives of their own, you'll appreciate this book. One thing in particular - how the Senior Officers acted when the action was over - priceless!

This was a great read and much appreciated. It'll go into my library and will give me pause whenever I think of the poor, hapless extras hat have to beam down with the Senior Officers.

and a side note.....
Nice dedication to Wil Wheaton!!
What kind of Federation sent down the most senior people on every dangerous mission?
And why did they have a security team on board who were about as effective as a mall cop? Why not a Marine detail for missions and strike force?
I bet the Romulans ran their Empire much more efficiently :)
Posted by Unknown at 2:30 PM