Sgt. Rock needed bad guys so what should they be called?

How about the BAD GUYS!! 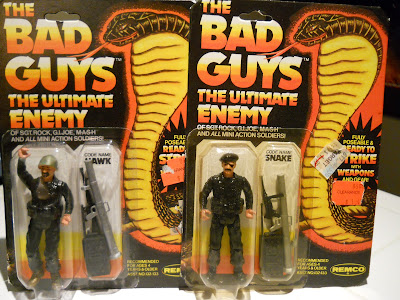 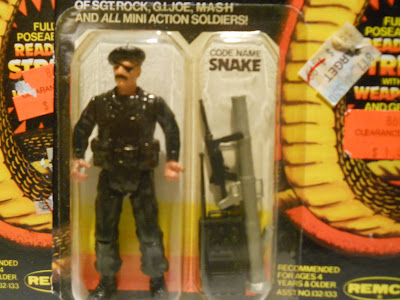 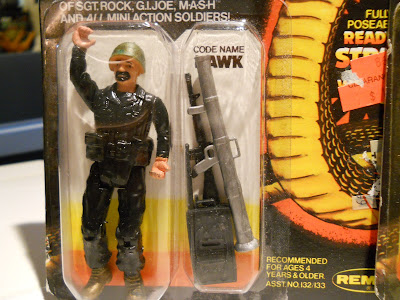 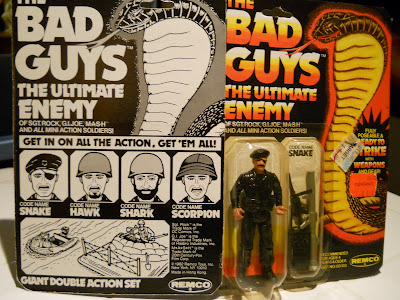 Pretty generic on the name front, but clad in black, loaded with weapons.....why not!!

The card does say enemy of ALL mini action figures so they must have been pretty bad ass!! These two specimens are hangin on the museum wall, encased so that they do not get loose and wreak havoc on the world! Actually, they are pretty cool MOC so I'm leavin em that way. I'll wind up getting some loose ones to display pretty easily.

I had all the Sgt Rock good guys, of the bad, and I have to admit, even though I just spent alot of space rippin them up there, I really liked these figures. Sgt Rock was a cool line to go along with the Joes. The RPGs, machetes, walkie talkies and guns were really cool accessories. They also came with premiums all the time like dog tags and patches. The bunker set and river boat were really cool accessories and they were all compatible with GI Joe!!

Quick aside about Sgt. Rock. When I got the Airborne patch with one of the figures one day I thought it would be cool to put in my wallet and carry around. I was 9 at the time so money and fake IDs weren't on my horizon yet. Anyway, I still have it to this day. I transfer it to each new wallet I get and unless something happens to it, it'll probably be there til I die. I pull it out whenever I get a new wallet, about every two years, and look at it and remember putting it there so long ago :)

I have to remember to tell my wife to throw my wallet in my casket when I die. Don't worry, she'll pull all the money out first :p
Posted by Unknown at 9:57 PM