I have a soft spot for these figures. Remco's Sgt. Rock line is a "Knock Off" of GI Joe, but they are really nice figures in their own right. I had alot of the figures. The articulation is limited at the knees and arms but they have enough detail to put them to good use. I used them mostly as front line soldiers for the Joes, or fill in bad guys that weren't Cobra but maybe soldiers from foreign lands and such.


Here we have Gunner: 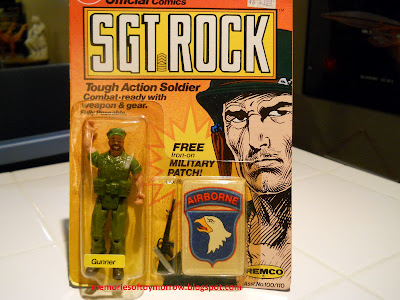 Got this guy MOC for a sweet price:)
Had to get him just for the patch I mentioned in my post about the "Bad Guys":
sgt-rock-needed-bad-guys
I'm really liking getting figures MOC. The card art itself brings back memories of seeing them hanging on the pegs!
﻿
﻿ 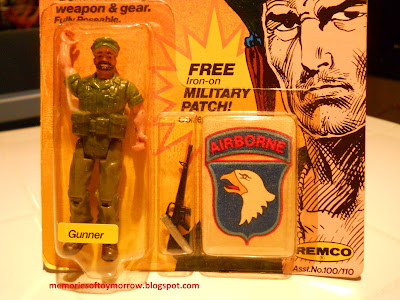 For a Gunner he only comes with a M-16 and a machete.....
Usually Sgt Rock figures came with a nice hoard of accessories and I incorporated them into the GI Joe weapon stockpile.
The Machete and walkie talkie have hooks on them that make it easier for the figure to hold them but can be hooked onto the figure's belt too.
The shovel can be put in a hole in the figure's belt to store it there as well.
In my world that sort of stuff went a long way and I still dig when a figure has a holster or can carry all his equipment.﻿ 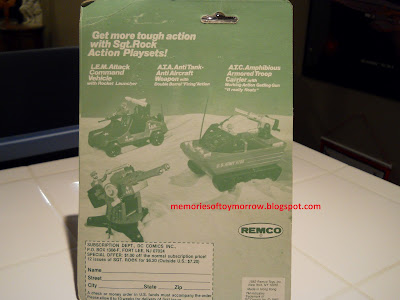 Here's the back of the card showing off some of the vehicles. I never got any Sgt. Rock vehicles, opting for GI Joe ones, but I did get the machine gun nest with the mounted 50 cal, sandbags and barbed wire......I put that to alot of use!!
GI Joe was and is a great toy that defined war play for kids of my generation, but knock offs like Remco's Sgt Rock added alot of flavor to allow for a bit more creativity with play. They were usually a bit cheaper so you could get a bunch of em. My parents didn't encourage "Army Building" cause in their eyes they didn't want to buy multiples of the same figure. Lines like this one made it possible to bolster the ranks.......HEY someone had to get shot up!! Snake Eyes could only shoot the Cobra and Cobra Officer so many times!!
Posted by Michael at 3:14 PM